Anyone familiar with the work of International Justice Mission (www.ijm.org) or with its founder and president Gary Haugen may have heard of Haugen’s most recently published book, The Locust Effect: Why the End of Poverty Requires the End of Violence.

In The Locus Effect, Gary Haugen, along with Victor Boutros, a federal prosecutor with the U.S. Department of Justice, leads us on a “journey into the vast, hidden underworld of violence where the common poor pass their days out of sight from the rest of us.” When most people think of poverty, they naturally think of hunger, disease, and illiteracy, explain Haugen and Boutros.  But what they often fail to think of is the “reality of common, criminal violence” the poor suffer on “a much larger and more persistent scale” than most of us can imagineundefineda violence that “consistently frustrates and blocks their climb out of poverty” (introduction, xii-xiii).  Haugen and Boutros propose, therefore, that whenever we speak about global poverty, we must also speak about “the violence imbedded in that poverty” (conclusion, 277).

As I considered how SowHope’s mission intersects with the violence that Haugen and Boutrous so vividly describe, I realized that SowHope knows all about the violence perpetrated against the poor, especially women.  Our mission – which is to inspire and empower the poorest and most vulnerable women in our world by offering them wellness, economic, and educational opportunities – speaks out against violence, as do our projects and partners and our methodology of supporting and empowering local leaders.  Wherever we sow hope, we sow peace as well.

Projects and partners: One of the projects SowHope supports in Kenya is microfinance.  Our partner in Kenya organizes her microloan training sessions so that women from opposing tribes room together and share meals together.  By the time these training sessions come to an end, the women have made peace, learned to respect one another, and chosen to work together to support each other’s business ventures.  In Democratic Republic of Congo (DRC), in the aftermath of a war where terror and death reigned, SowHope’s partner organized a cooperative of 800 women from four warring tribes to build a birthing clinic.  After all the violence and killing, she wanted to do something that would affirm life and peace.  With their own hands, and with whatever resources they could gather, these women built their life-giving clinic, an on-going project that promotes peace among these tribes.

In Nigeria, where ethnic and religious differences cause great conflict, SowHope’s partner brings together women of different religious beliefs and different villages by offering them vocational training, all the while emphasizing that what these women have in common is greater and more important and more life-affirming than whatever differences they experience.  Her dream is to have a center where she can bring together both Muslim and Christian women–women who are poor, who are left out, who have no voice; train them in the skills and understanding they need to take care of their families and communities; and then send them out as caretakers, peace makers, and community builders.

Methodology: Whatever the cause of the violence perpetrated against the poor, whether tribal or religious differences, or corrupt and abusive criminal-justice systems, SowHope also promotes peace by supporting local leaders who have started grassroots movements in their communities. Haugen and Boutros point out that to reform corrupt and abusive criminal justice systems will require local, grassroots efforts supported by strong local leaders. It will also take hope.  To fight for changeundefinedand fixing a broken criminal justice systems will require a prolonged struggle and strong willundefineda community has to believe change is possible.  By sowing hope into communities and by supporting and empowering local leaders who advocate for peace, SowHope is laying a part of the foundation that Haugen and Boutros say is vital to creating law enforcement systems that protect the poor from the criminal violence that threatens them on a daily basis.

The Locust Effect has given me not only a deeper understanding of what it means to be poor in the Developing World but also a deeper understanding of how SowHope’s mission, projects, and methodology address the violence that permeates the lives of the poor.  After reading this book, I can’t say how much I appreciate knowing that wherever we are sowing hope, we are also sowing peace. 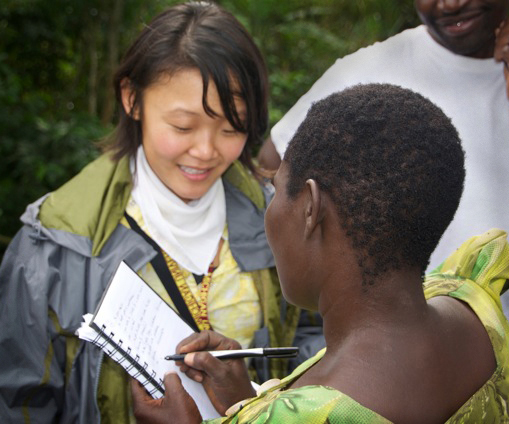