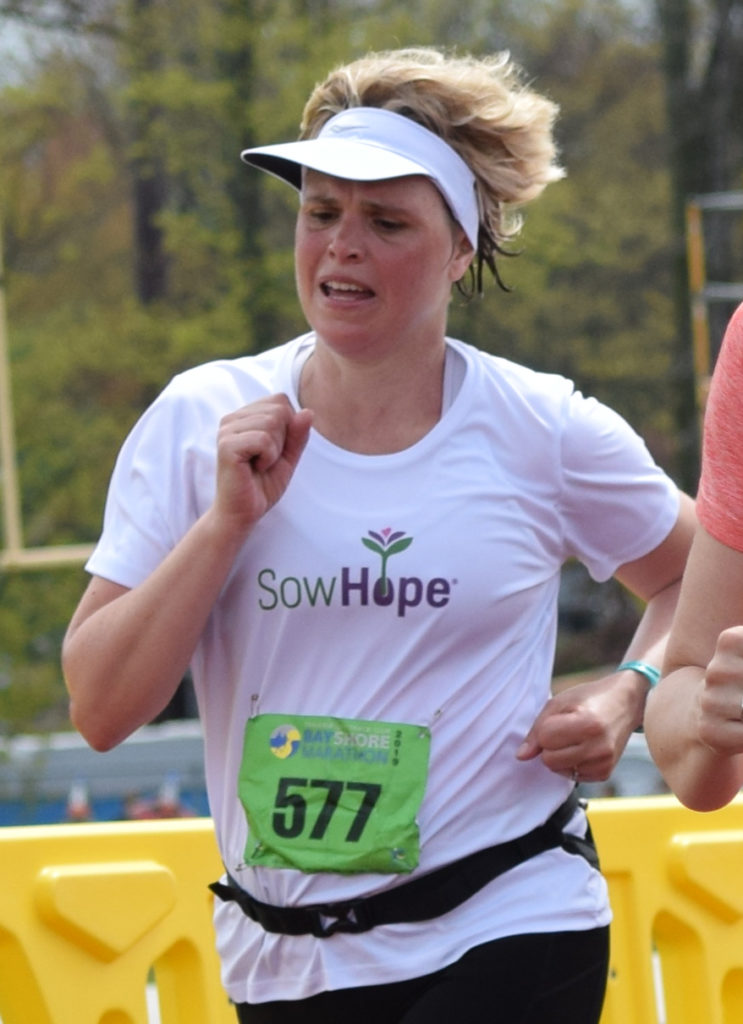 Esther running in the marathon

In order to make a small difference as part of a larger, global cause, Esther ran the Bayshore Marathon in Traverse City, Michigan, on May 25, 2019. She only started running two years ago, but has already run three marathons! Esther dedicates each one for a good cause. Born in Cameroon, Africa, as a daughter of Swiss missionaries, Esther lived the first 8 years of her life overseas. She explains, “SowHope’s work in Africa appealed to me because Africa has always been close to my heart.”

Esther chose to support SowHope in May because SowHope is a locally-based nonprofit organization with a global outlook and impact that allows people to connect locally to issues with projects that affect people around the world. She set up a peer-to-peer fundraising page for SowHope so all of the donations could go towards the Burkina Faso Fistula Repair matching gift campaign. She also designed and printed a customized SowHope t-shirt which she wore during the race to increase awareness and promote SowHope. She was able to raise over $500 while advertising for SowHope! Esther says that all three program areas of SowHope (wellness, education, and economic opportunities) are equally important. “I believe they all go hand-in-hand and influence each other”, she explains.

Although Esther has a penchant for running, she states that she can honestly say that running is not a passion. “One thing that motivates me,” she says, “is knowing that I am running for a purpose.” Esther echoes SowHope’s belief in the ripple effect of supporting women, stating, “I think that every woman can use the help of another woman. If you empower and enable a woman, you also empower and enable the community in which she lives. The impact of your actions is not limited to today, but also affects future generations.” Thank you, Esther, for choosing SowHope!