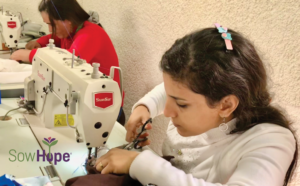 Twenty-five impoverished women, most of them widows, learned how to make leather bags and wallets at a SowHope-funded project in Egypt. Our partner, Bassem, reported that in addition to attaining financial independence, the women also became more social and loving, their personalities improved, and there was no jealousy between them. He said they worked cooperatively in spite of cultural and religious differences, and it was inspiring to witness the bridge of friendship they built.

This positive feedback reflects the impact the six projects SowHope has funded in Egypt have had on many of the almost 8,000 women who have participated. Another example of the sustainable growth that happens when women learn a skill is a group of five women from the slums that attended a sewing course at a training center. After they received advanced training in sewing, they opened a shop and “produced 300 pieces of clothing to distribute to the poor,” Bassem shared. Their work is a testament that when women gain hope and inspiration, children and communities will also benefit.

In 2020, SowHope is continuing its partnership with Bassem by funding a ten-day comprehensive development course for 60 young women. The women will receive vocational training in either hairdressing or sewing so they can earn a living, and they will also receive emotional and social support to equip them in their lives while being agents of change for others in their communities.