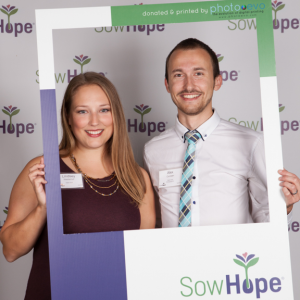 As a photographer, Alex Comben looks at the world through a distinctive lens. With this in mind, he was intrigued when his wife, Dr. Lindsey Westerhof, wanted to attend SowHope’s International Women’s Day photography exhibit in 2018. “That event was enough to make me passionate about their mission,” said Alex, who has been a volunteer and donor ever since.

Alex grew up in Australia, moving to Grand Rapids, Michigan only 5 years ago to be with his soon-to- be wife from the States. They had a serendipitous meeting in Europe when both of them were traveling independently. They live in Eastown now with two cats, Piper and Chloe. Alex and Lindsey are both fervent supporters of SowHope, hosting or sponsoring a table every year at the annual gala since 2018. Because of his expertise, Alex wanted to add another element to the annual event. So in 2019, he convinced his employer to donate materials necessary for a photobooth to be available for all guests while he captured exceptional photos of gala attendees who are dressed to impress. The photobooth is now an annual favorite addition for SowHope supporters and their guests.

But Alex doesn’t want his volunteering to end there. He hopes to help SowHope document their great work by traveling with the organization someday soon. “SowHope’s approach, partnering with local leaders solving local problems using local solutions, is something that just makes sense to me,” he explains, “I like that sustainability and dignity are central to SowHope’s ideology. I also think their transparency is exemplary and helps maintain my faith in them.” He is inspired to continue supporting SowHope because of the change that comes from his support, “To see that we can enable proud, permanent change means we’re not helping in vain.” 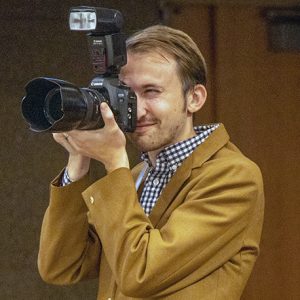 Alex taking photos at the 2021 Gala

SowHope has three important project areas: wellness, education, and economic opportunities. And though it’s hard to pick one, Alex Comben is inspired by the stories he hears about economic development from SowHope projects. “Even though I think education creates the largest ripples, I like  hearing about women who have these fantastic and sometimes ingeniously simple ideas who just need a tiny push to get them started. They then generate their own momentum, pay back their microloans, and become independent and sometimes leaders who end up helping other women in their area…it’s heartwarming to hear about the communities who turn down more funding because of the success they have.”

As a photographer, Alex likes to think about what kind of imagery would be effective in spreading SowHope’s message as he hopes to capture it in the field, though he’s wary that the most effective images may be too invasive because of the nature of some SowHope projects. Being able to lend his ability to further support SowHope and give the women a voice through photography is a strong motivation.

SowHope is fortunate and grateful to have Alex on our team. Thank you, Alex!