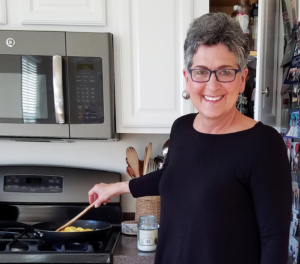 Diane Cisler believes “we all have an inherent responsibility to make this a better world.” To that end, she volunteers her time to a variety of causes – SowHope being at the top of her list. A self-described “consummate foodie,” Diane has hosted several of SowHope’s Board of Directors’ retreats – opening her home and kitchen to these annual day-long events.

Born and raised in Grand Rapids, Michigan, Diane has lived in the small Midwestern city most of her life, and it is also where she raised her two wonderful sons.

Before retiring, she worked at NPR and PBS for many years. While employed at these national organizations, Diane raised funds and hosted events where she was able to meet many of NPR’s news correspondents. “As intriguing as the news was, working behind the scenes and getting to know the reporters was even more interesting!” she said.

After working for nonprofits her entire professional career, Diane finds SowHope’s strategy to be powerful and effective. She acknowledges the hope and change that SowHope-funded projects inspire in women individually – and the powerful ripple effect that flows from these women to their families and communities. Not only do the women achieve new goals and create new destinies for themselves – their children also benefit from the newfound income by being able to attain education. Diane considers wellness projects that SowHope funds to be especially important because “it is impossible for someone to reach their education and economic goals if they are not healthy.”

For anyone who wants to make a mark by changing the world, one person at a time, Diane believes SowHope is where you should direct your time, talent, and treasures. Thank you, Diane.